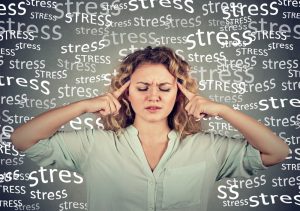 In situations of stress our central stress response system, the hypothalamic-pituitary-adrenal (HPA) axis, is activated. This activation prompts the production of a hormone known as cortisol (a glucocorticoid), which is designed to prepare us to respond (either behaviourally or physiologically) to the stressor. For example, the HPA axis may become activated as a person crosses a road only to realise a car is approaching at high speed. HPA activation prompts the production of cortisol, which provides the person with the heightened mental and physical agility to quickly get to safety.

Glucocorticoid receptors regulate gene expression, which means they can have potentially long-term effects on the performance and function of brain regions that regulate their release.

Past research has shown that the brain is particularly sensitive to stress during times when it undergoes important age-related changes over the lifespan (such as in early childhood, adolescence and old age).

Animal studies have shown that prenatal stress can have ‘programming-like’ effects on the HPA axis and the brain. A pregnant female exposed to single or repeated exposure to stress will secrete more glucocorticoids, which will cross the placenta and increase the HPA axis activity of the foetus, subsequently affecting brain development.

Postnatally, glucocorticoid production varies according to environmental circumstances – severe abuse is associated with decreased secretion of glucocorticoids whilst maternal separation is associated with increased secretion. At this stage of life, it is thought that the hippocampus is the brain region most vulnerable to stress. The amygdala (the brain region responsible for memory of emotions and fear) continues to develop until a person reaches their late twenties, and stress may be associated with changes to its volume.

It is also known that early-life stress can make an individual more susceptible to stress and cognitive deficits in later life, suggesting that there is an interaction in the effects of stress at different times in a person’s life.

In adolescence, when the brain is undergoing increases in the frontal cortex, stress may affect its volume.

In adulthood and old age, the hippocampus (the brain region which plays a major role in learning and memory) may be vulnerable to the effects of stress hormones. Stress upon this brain region in old age can detrimentally affect the generation of neurons, new synaptic connections and neuronal survival rates.

Along with certain lifestyle choices (poor diet, excessive alcohol consumption, smoking cigarettes etc), psychological stress is considered to be a major risk factor for heart disease. Studies have shown that individuals with a type A personality (consisting of traits such as competitiveness, impatience, frustration and being quick to anger) are more prone to coronary heart disease, highlighting the importance of reducing stress levels to promote overall wellbeing.

A 1982 study explored the effects of stress upon the spread of cancer in laboratory rats. The rats were implanted with tumorous cancer cells and some were then exposed to repeated shocks for which they could not escape. After one month, 50% of the rats that were not shocked had died of cancer, whilst 73% of the cancerous rats that were subjected to the inescapable shocks had died. The study was one of the first to demonstrate how the effects of psychological states such as helplessness can hasten the spread of disease.

Whilst there are some stressors that cannot be changed, nobody can completely avoid stress. The following recommendations may be helpful in assisting you to recognise certain stressor in order to reduce them: