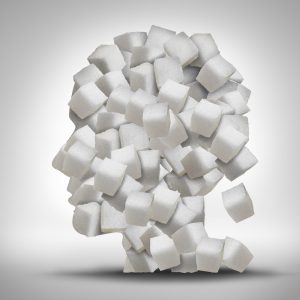 The energy that we get from food is derived from three sources: fat, carbohydrate and protein. In past decades, nutrition information has recommended reducing the intake of fat to maintain good health. However, in reducing our consumption of fat, we have inadvertently increased our consumption of carbohydrate (sugar) – protein consumption has remained relatively stable. This has tied in with many western populations observing increased levels of obesity.

Whilst the consequences of a high sugar diet are clearly evident through weight gain, its consequences for brain health are far more pernicious. Research suggests that diets high in carbohydrates can be bad for your brain because of the effects they have on the body’s metabolism of glucose and insulin. Diabetes and an insensitivity to insulin are considered risk factors for dementia and cognitive decline. Older people with impaired glucose tolerance have shown signs of cognitive deficit. Whilst there is uncertainty about the mechanisms underpinning these effects, it is believed that oxidative stress and impairments in transportation of glucose to the brain are potential causes.

A 2013 study tracked 940 people aged between 70 and 89 years old who showed no signs of cognitive impairment. Participants were asked to provide information about what they ate over the previous year and their cognitive function was again evaluated at a four-year follow up. Of the 940 participants, 200 showed mild cognitive impairment (memory, language, thinking and judgment deficits that are considered greater than those associated with normal ageing) at follow up.

Sugar is important for fuelling the brain, but it becomes problematic with high intake. Similar to what occurs in type 2 diabetes, high levels of sugar may cause the body to become resistant to the sugar and prevent the brain from using it efficiently. 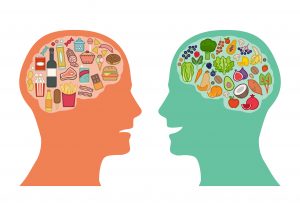 A recent Queensland University of Technology (QUT) study (2016) conducted on mice showed that diets high in sugar can act on the brain like other physically addictive substances such as alcohol, tobacco and drugs like cocaine. Mice who binged on sugar appeared to have far fewer neuronal links in certain regions of the brain such as the basolateral amygdala and the prefrontal cortex, mimicking the deficits seen in animals addicted to alcohol.

Long-term, excessive and intermittent sugar consumption affects can lower the brain’s dopamine levels. Over time, more sugar is required to maintain dopamine levels and experience the desired hit of pleasure. In this way, the reward system of the brain responds to sugar much the way it would to alcohol, tobacco and illicit drugs, such that reducing sugar consumption can cause withdrawals. In fact, brain scans of obese and cocaine addicted individuals have been compared and both show remarkable similarities.

High sugar consumption over lengthy periods of time can begin to affect mood and motivation, which can make it even harder to kick the habit.

The same QUT study gave sugar-addicted mice a medication used to treat nicotine addiction and noted that the mice then consumed less sugar. These results suggested that sugar may bind to the same circuitry in the brain as that of nicotine and alcohol, thus making it just as addictive.

The following recommendations may be helpful to reduce your likelihood of developing mild cognitive impairment and dementia: